On our second weekend in Prague, Colin and I decided to take a spontaneous day trip to Kutna Hora. It’s a quick and easy day trip from Prague, and I would highly recommend it for an afternoon.

Kutna Hora is a small town in Central Bohemia, about an hour from Prague by train. It’s very easy to get to, with trains leaving almost every hour, and most of them direct.

The big draw of Kutna Hora is the Sedlec Ossuary. As you’ll see below, the Sedlec Ossuary is a cave-like space, located beneath a church, where the skeletons from 40,000–70,000 people have been turned into macabre art. An ossuary is usually a space, as big as a house or as small as a box, where skeletal remains are housed when gravesites become too full. What’s interesting about this ossuary is that instead of just storing the skeletons, they are rearranged into art and furnishings all around the rooms.

The church itself was built in 1400 and skeletons began moving into the ossuary in 1511. But it wasn’t until 1870 that woodcarver František Rint began arranging the skeletons into what we see today.

As our main reason for visiting Kutna Hora, Sedlec Ossuary was our first stop. It’s about a 15 minute walk from the train station, though there’s also a bus.

It was a super cool experience to see all of these bones and art pieces. I thought I would be grossed out, but it was actually just really cool. And luckily, it wasn’t too crowded when we went to visit so we could really see everything. It’s not a huge space, so a lot of people in there would have been a problem. We joked that for Colin, who had to step away from his x-ray job back in Vancouver when we moved to Prague, this was the best way for him to get back to bones. And he definitely enjoyed pointing out different bones and telling me which ones they were.

From Sedlec Ossuary, we walked into the Old Town, which took about 20-30 minutes (again, there’s a bus option). In the Old Town, we admired the winding streets and pretty buildings. While there were lots of pretty things to look at, it wasn’t the most beautiful little town I’ve ever seen – which I think just speaks to how lucky I have been in my travels. It’s worth a stroll through, but I would have to say the buildings in Prague, especially in our neighbourhood, are better 😉

The weirdest, and also the nicest, part about the Old Town was how quiet it was. It was deserted! It felt like a ghost town, which was quite eerie after visiting the ossuary. We were shocked to see the streets completely empty and only a few people walking around or sitting at the restaurants. And, being a Sunday, most of the shops were closed too. This was a welcome break from the crowds we experienced in Prague’s Old Town. So if you’re looking to explore a place you can have to yourself, I definitely recommend Kutna Hora.

After refueling with coffee and cake, we walked around the Old Town and admired the buildings, the Stone Fountain and the Plague Column. We looked at some churches and enjoyed the beautiful view of the valley and the Jesuit College in the distance.

I think there was more of Kutna Hora for us to see and discover. It would have been nice to just wander the streets some more and find the hidden gems around every corner. And I think going into some of the churches would have been pretty cool too. But we ran out of time as we wanted to get back to Prague in time for dinner and walking Ellie, who we left behind for this quick trip (we assumed a dog wouldn’t be welcome in a church full of bones).

We had an awesome time exploring Kutna Hora and seeing the Sedlec Ossuary up close. I would highly recommend Kutna Hora as the perfect little day trip from Prague, and could really be done in just half a day. I love that we’re able to go on these little day trips or weekend trips from our new base here in Prague. And I really love that we’re taking advantage of these opportunities and heading out on little trips only a couple of weeks into living here.

Have you visited anything like Kutna Hora’s Sedlec Ossuary?
Do you find this sort of art cool or gross?

Sharing is caring – Pin it!

Driving the South Coast of Iceland 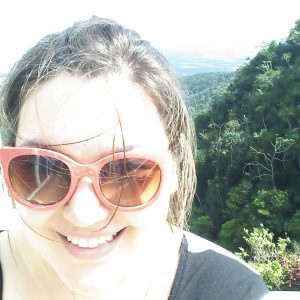